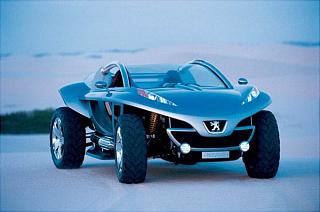 Reports emerging overnight suggest that a certain automobile, albeit in concept stage at Peugeot, takes more than a design hint from a vehicle featured in Bungie?s Halo.

The motor in question is the Hoggar and is described by the French auto giant thusly:

?The Hoggar is a top-end 4-wheel drive vehicle consisting of a self-supporting carbon bodyshell reinforced with two lengthwise stainless steel roll bars. First and foremost, the Hoggar is a two-seater open-top vehicle. Consequently, this concept car does not have either a roof or side windows: the cabin is largely open, without a roof panel.?

No mention whatsoever of a roof-mounted plasma gun?

?The Hoggar has two powerplants with a sequential gearbox controlled using a lever or controls fitted to the steering wheel. The vehicle is however capable of running on just one of its two motors. Everything is interlinked electronically: there is no mechanical link between the front and rear.?

Erm, okay, but still no mention of a fight to save the human race?

?The Hoggar, which was designed to cross extreme obstacles, has highly-developed suspension for this purpose, incorporating 2 shock-absorbers per wheel.?

Right, that?s it. Let?s look at the evidence:

The Peugeot Hoggar, or whatever it?s called (Hoggar, sounds suspiciously like Final Fight Hagar if you ask us) looks like the designers at the firm directly copied Halo?s Warthog Defender ATV?

Whether an admission of plagiarism or - heaven forbid - a Tomb Raider-style licensing agreement is on the cards, you?ll be the first to know.
Companies: Bungie
Games: Halo: Combat Evolved