When Arnie said he?d be back, we didn?t think it?d be so soon. 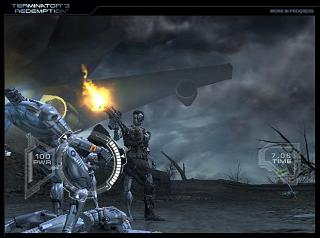 All Images (2) »
Purchasers of the Terminator 3: Rise of the Machines game, due for release tomorrow, November 28, are in for some bonus T3 action. A playable demo of next year?s Terminator 3: Redemption title comes with the PS2 and Xbox releases.

"Terminator 3: Redemption will give gamers an opportunity to experience the world of Terminator like never before - they will go places and do things that have only been hinted at in the films," said Jim Galis, executive producer, Paradigm Entertainment studio. "The Terminator movies have become known for their incredible chase scenes and total destruction - in Terminator 3: Redemption we're going to recreate that moment-by-moment intensity with incredible action-driving only the Terminator license can provide."