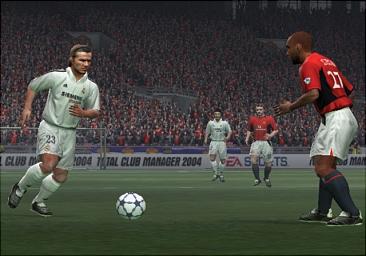 All Images (5) »
FIFA 2004 has today kicked Konami's Pro Evolution Soccer 3 off the top of this week's All Formats chart, as reported by Chart Track.

With so many good football games around at the moment, it is a difficult time for consumers to decide which one to buy. The ever-popular and officially licensed FIFA range is fine in terms of playability, but in the opinion of aficionados of the genre, PES 3 is the better game.

Football games are a real money-spinner at the moment, with Codemasters recently launching 17 club specific versions in their Club Football range. ?Insert Team Name Here? Club Football is an above average football game, not too dissimilar to Konami?s work of genius, but most folks can resist owning a football game with their favourite club?s name on it, can?t they?

EA and Konami are pushing this genre to a point where gameplay is becoming more and more immersive. We know many people who have lost hours in the last seven days with PES3 and we expect many more to do so this week with the new FIFA game.

It's interesting to note that of the top 11 games ? yes, 11 - there are four football games. FIFA 2003 is still hanging on in eleventh place after a staggering 53 weeks in the chart.
Companies: Electronic Arts Konami
Games: FIFA Football 2004 Pro Evolution Soccer 3