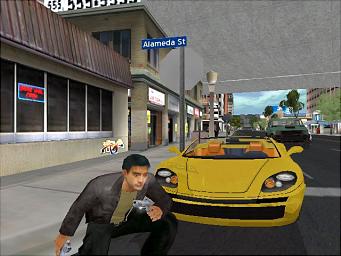 All Images (2) »
Activision is almost certain to miss its intended global roll-out slot for True Crime: Streets of LA, following a lawsuit filed to Los Angeles District Court claiming that game?s main character was ripped off from a series of novels.

Specifically, author Robert Crais claims that the main character in True Crimes, one Nick Kang, is lifted from a series of books written by Crais featuring ex-cop Elvis Cole.

It is thought likely that an interim prevention of publication order will be issued while the case is hammered out. Crais is seeking damages from Activision, for the alleged use of his character.

And this will probably not be too much of a bite for Activision to take, given that True Crime, according to the games industry grapevine, was almost certain to miss a 2003 release?

We?ll bring you updates if anything interesting happens with this story.
Companies: Activision
Games: True Crime: Streets of LA