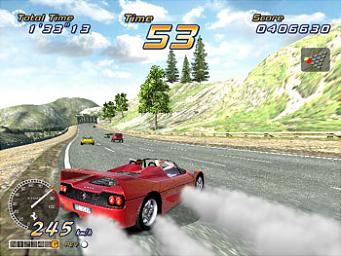 All Images (2) »
According to a report in Wednesday?s Dorimaga, mirrored in today?s Famitsu, the Chihiro arcade game Outrun 2 and Virtua Cop 3 will not be ported to Microsoft?s Xbox.

Both reports quote the fact that the games are peripheral reliant and were only intended for the arcade.

Dorimaga also points out that, according to AM-2 sources, the cost of converting the games and implementing new content to make ?acceptable home versions? would mean that they would both be full price, relatively short conversions.

This will come as a blow to the Sega hardcore, though in fairness it does show a new-found ability to avoid obvious commercial pitfalls. Both Outrun 2 and Virtua Cop 3 are arguably niche games, and both would have been hammered in the press. And if not hammered, then too short, too much the coin-op.

We read somewhere yesterday that everything Sega does should be accompanied by circus clown music, which was an arrow to our fanboy heart, despite making us laugh out loud.

Perhaps this is the sign of a new, more commercially savvy Sega Enterprises?

Everything Sega as it breaks.