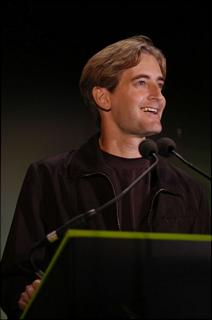 Ed Fries
Epic Games, creator of the legendary Unreal series and the universally-lauded Unreal game engine, has signed on the dotted line with Microsoft, and is set to develop - in conjunction with its recently formed Scion Studios - an as yet undisclosed number of titles exclusively for Microsoft Xbox and Windows. As vague as they come when these things are first revealed, not only was the number of games kept under wraps, there were no working titles mooted either. Knowing Epic?s pedigree, we anticipate at least one game incorporating running around and shooting guns, possibly a variation on the Age of Wonders theme. But then again, Jazz Jackrabbit may be on his way back!

Ed Fries, vice president of Xbox game content, commented, "We're looking forward to working with Epic, one of the industry's most respected and successful games developers. Their games have thrilled millions of gamers around the world. Epic and Microsoft have technology leadership in common - the titles they are developing for Xbox will use the power of the console to deliver cutting-edge gaming experiences." ?Cutting-edge gaming experiences?? Maybe Jazz Jackrabbit won?t get a re-vamp after all?

We?ll keep ?em peeled for any further developments regarding this deal between the companies, and bring you news of any games that it bears, as soon as they?re announced.