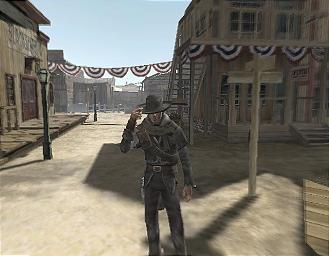 All Images (2) »
The entire world knows that along with the doomed Capcom Fighting All-Stars, both Red Dead Revolver and Dead Phoenix have been cancelled by Capcom Japan.

We spent an hour chewing the cells with Viewtiful Joe producer Atsushi Inaba the other day. One of the questions that we put to him was why the two games had been canned. What was the reason behind terminating two anticipated titles.

?I have read this and it is not true,? said Inaba-san. ?We have made no announcement that either game has been canned. At this point in time, there are only rumours. Officially both games will still be coming out.?

So there you have it, straight from the horse?s mouth. Of course, this might just be an example of company line-towing, which would be a shame. And it might be that both games will indeed be released, which would be fantastic!

We?ll bring you clarification on this strange situation as we get it.