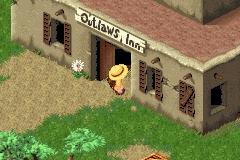 Sabre Wulf
All Images (3) »
Gossip has been rife over the last few weeks that Rare, the former Nintendo sweetheart swallowed by a fledgling Xbox campaign, would terminate all Game Boy Advance development, preferring to concentrate its resources on delivering promised Xbox goodies.

However, it seems that at least four titles will see the light of day, namely Banjo Pilot, the racing title formerly known as Diddy Kong Pilot, Sabre Wulf, a remake of one of Rare's classics, Banjo-Kazooie: Grunty's Revenge, and a previously unannounced game called It's Mr. Pants.

All three games have been snapped up by THQ, the firm that published a doomed Conker's Bad Fur Day for Nintendo 64 in April 2001.

Ken Lobb, studio manager at Microsoft Games Studios said, "Rare has made world class games for both console and handheld. This agreement with THQ will allow Rare to continue to offer top level content for the Game Boy Advance fans that know and love Rare. I'm really excited that we can bring all of these excellent games to fellow fans of the Game Boy."

Microsoft no doubt sees a considerable threat in Sony's plans to deliver a home entertainment hub, complete with portable media player, and perhaps this support of the GBA illustrates this better than anything before it.

It's worth remembering that Microsoft could have shut down all GBA development. It could have cut that revenue stream off for Nintendo. But it didn't. It is enabling a company that is officially a direct competitor to make money.

You have to ask yourself why?