PS2 buries a couple in the onion bag. 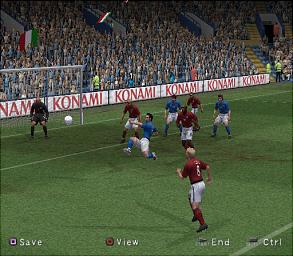 Pro Evolution Soccer 3
It?s that time of year again. Football fans everywhere shall be putting down their pies and Bovril in exchange for sweaty PS2 controllers. If you?re not watching the Premiership, then more likely than not, you?ll be playing one of two upcoming titles: the glorious Pro Evolution Soccer 3 or Premier Manager 2003/04. If you have a girlfriend, say your goodbyes now.

Premier Manager, published by Zoo Interactive, continues the legacy of its Amiga heyday, offering the usual flood of statistics and complicated management systems. There are 10,000 players crammed into this neat PS2 package, along with 500 managers and 320 clubs - that?s comprehensive enough, we reckon. Gremlin haven?t updated this series for quite some time, so it will be good to see how their latest interpretation fares off the pitch.

Already generating more buzz than Beckham, Pro Evolution Soccer 3 is eagerly awaited by hordes of Konami fans. Whilst the Japanese version, Winning Eleven 7, is already selling well, we fully expect Pro Evo 3 to make a big dent on the sales chart in Europe too. We?ll have to wait until October before we can sample the improved action: advanced dribbling, improved passing, referees playing advantage? this should be the ultimate football game for PS2. Back of the net!
Companies: Gremlin Interactive Konami Zoo Digital
Games: Pro Evolution Soccer 3