The most customisable game ever? 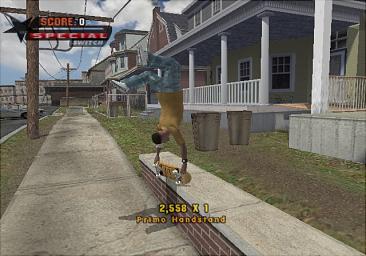 The fifth game in the series and we're still possessed to skate
The Tony Hawk Pro Skater series has followed a fairly logical, if lethargic, pattern of evolution?until now. Tony Hawks Underground retains the same tried and tested gameplay, but places it in a far more intriguing story-based context. Your quest unfolds within a large free-roaming city, punctuated by intertwining missions, much like the GTA series. And like GTA, you can also get into cars, as well as golf carts and shopping trolleys!

For fans of the series, Underground is shaping up to be spectacularly impressive. Especially when they've taken all the old extra features and made them ooze with ultra-goodness. The 'create-a-park' mode, for instance; you still get to design your own skate park, but because Underground is essentially one massive level, so are your custom courses. You can basically build your own city and create your own missions. Like, rad, dude.

As we mentioned last week, you can also scan your own face onto your custom character. Hilarity will prevail as you experiment endlessly with peculiar facial hair. Not just that, you can even create your own special tricks and name them yourself using inappropriate language. In fact, there's so much to fiddle around with that Activision think it could be 'the most customisable video-game you've ever played'. By the sounds of it, we wouldn't dispute that.