Pacman, Pikmin, Pokemon and so on. 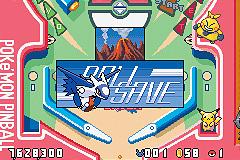 Pokemon Pinball: Ruby & Sapphire
All Images (4) »
Nintendo have revealed the games they will show at this year's ECTS in London (Aug 27-29). Some of the most eagerly anticipated Nintendo titles will be displayed in a big van just outside the entrance. That might sound like some kind of dodgy boot sale, but at least the van will be very big and shiny, we reckon.

Alongside Gamecube and GBA games from third party developers, most of the attention will be on Nintendo's own games. Every single one of them is a sequel, but considering these are follow-ups to some of the most respected titles in videogame history, that's quite an exciting prospect.