Mario and Luigi is Mario RPG 3? 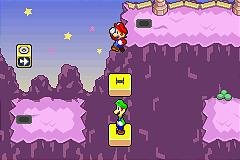 All Images (5) »
At this year's E3 Nintendo announced new games in the Mario and Zelda franchises. We knew this before the show, but were sworn to secrecy. We were only told that there would be new software on the show floor, not what it actually would be.

So you can imagine our excitement as we sat in Nintendo's press conference, safe in the knowledge that Miyamoto was about to show Mario 128 and the next instalment in the Zelda series.

And then he showed GameCube Four Swords and Mario and Luigi on the GBA.

Very much deflated, we got to have a good look around both games at E3 a day or two later. From what we could tell, Mario and Luigi was a quirky co-operative platform game with puzzle elements, solved via the differing abilities between the two characters.

However, reports emanating from Japan overnight suggest that Mario and Luigi is actually the third Super Mario RPG title and is considerably more of a game than was first thought. The title being used is Mario and Luigi: Superstar Saga.

At this point in time we are unable to clarify the situation, though expect something concrete from Nintendo early next week.