Hooray for EyeToy, it is truly the saviour of videogames! 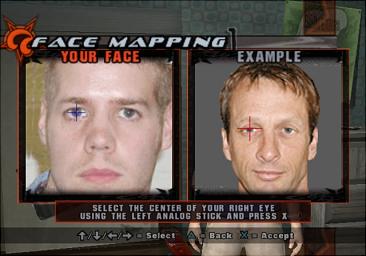 All Images (5) »
Activision has finally shown exactly how you'll be able to squeeze your very own boat race into the upcoming Tony Hawk Underground - incredibly, the fifth game in the massive franchise.

By way of EyeToy, you'll be able to take a snapshot of yourself and map it over a face structure. You'll also be able to adjust your height, weight and limb-length, as well as design your own outfit - every skate-videogame-loving narcissist's dream come true!

The new batch of screens released today also illustrate the game's edgier approach to the genre it now dominates, with police busts and illegal skating taking the centre stage and replacing the dry humour of the original four games.

As Tony is tied into a contract with Activision that will more than likely see him kick-flipping his Zimmerframe, expect a lot more of this brilliant series in the coming years.

Licensed and endorsed games get a bad press, often fairly so. NeverSoft and Activision have proven time and time again that delivering top-notch gaming, when combined with the likes of a living legend Tony Hawk, will sell and be enjoyed time and time again.