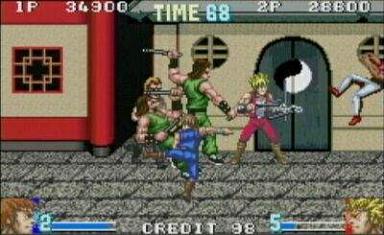 At some point in time that slips our memory, Atlus of Japan secured the rights to Technos' seminal side-scrolling beat-em-up, Double Dragon for Game Boy Advance. Today we are thrilled to bring you the first image from the game.

From what we can tell, the game appears to be an evolution of the third arcade outing, with the characters having the "extra-jointed" look that, to be honest, didn't capture the imagination quite as well as the first game in the series.

Again, Billy and his pink-suited brother Jimmy have to fight their way through the bowels of a city in order to rescue the girl, for whom (in the hacked and bootlegged arcade version at least) they fight at the end.

Excellent wholesome fun we're sure you'll agree. As soon as we learn more about Double Dragon - due for release for the GBA later this year - we'll let you know.