Vice City for Xbox this Christmas 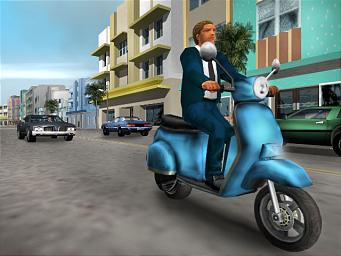 It has emerged this morning that Vice City, the most popular game in recent times, will be making an appearance on Xbox in time for Christmas of this year, in news that will be greeted by Xbox owners as a massive victory.

Indeed, according to sources, the game is almost complete, with the porting process eased massively by the fact that the middleware-to-PC work is already complete.

And although the GTA series is exclusive to Sony Computer Entertainment at this point in time, it seems that Rockstar is gearing up to take on the PlayStation giant, stripping the Grand Theft Auto prefix from the Xbox version.

Rockstar is hoping that by dropping the GTA tag, the agreement will not apply. We predict that Sony, fiercely IP-protective, will have other ideas. This also cements talk of a ?heavy Xbox game? that has been openly discussed by Rockstar staffers for some time. Given that the only franchise that could be described as ?heavy? from the outfit?s stable is GTA, what else could it be?

It?s also worth noting the somewhat bolshy stance taken by Rockstar at this time. Indeed, if this news proves accurate, for the developer/publisher to begin shoving Sony, with its colossal installed userbase, could be costly. What?s more, talk from within Take 2 tells of the company being split down the middle, with Rockstar on one side and everyone else on the other. Indeed, insiders have spoken of an almost unworkable imbalance of power and influence at the outfit, firmly weighted in Rockstar?s favour.

Speaking to Rockstar MD Neil Steven today, we were simply told, ?At this point in time, all I can say that the only thing confirmed is what Lapin said in the conference call.? Jeff Lapin, Take 2?s CEO, had previously stated that a ?significant Xbox SKU will be released between November 2003 and January 2004?.