Magic: The Gathering trading card game gets a new look

Atari put a spell on us. 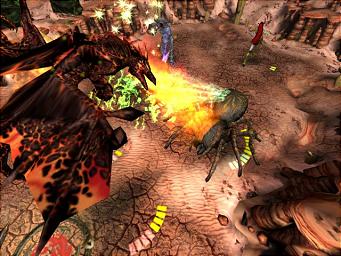 All Images (5) »
We have some new screens for you from Atari?s clumsily-titled Magic: The Gathering ? Battlegrounds, a game recently announced for Microsoft Xbox and PC. In development at Secret Level, Magic: The Gathering - Battlegrounds is filled with faithful translations of classic creatures, spells and enchantments from the premier trading card game in a 3D game environment, rife with real-time strategic fighting, wizard arsenals and creature combat.

"Magic represents one of the best game franchises ever created, constantly evolving and always offering something new to challenge and entertain players. When we approached this project we asked ourselves how we could expand the Magic experience interactively to match - the answer: by making it real-time and providing significant Xbox Live support," said Jean-Philippe Agati, senior vice president and head of Atari?s Los Angeles studio. "Magic: The Gathering - Battlegrounds is like no other Magic game to date - it is incredibly fast-paced, eye-popping in full 3D and filled with more strategic fighting action than you can shake a stick at. What's more, we've gone to great lengths to deliver Xbox Live features allowing players to compete against friends worldwide, track their stats and rank as well as download new creatures, spells, arenas and more."