Panasonic happy with Q as console plans proper are snubbed 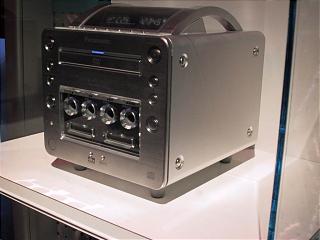 Following recent speculation that Matsushita, the world?s second biggest producer of consumer electronics, would release a gaming console to compete with offerings from Sony, Tsutomu Toda, Director in charge of Technology and Director of the Network Division and Security Solution Division (phew) at Matsushita, yesterday denied the possibility.

?We recognise that a strong market for videogame consoles exists, and this is why we already partner Nintendo. Matsushita released its own brand of the 3DO console but it was not well accepted. That experience has made us cautious in the market. A completely new Matsushita branded game console is not being developed."

However, it is known that Matsushita, better known as Panasonic in the west, is working closely with Nintendo on convergence devices to play DVD movies in conjunction with videogames, both for existing GameCube technologies and future Nintendo home consoles.

Yet still there is no mention of the possibility of a western release of the Q, the firm?s existing DVD-enabled GameCube.
Companies: Matsushita Nintendo Panasonic