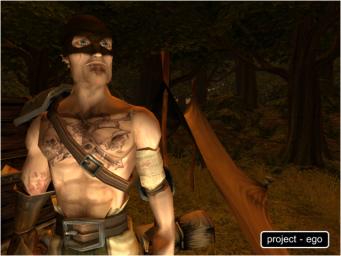 All Images (5) »
Peter Molyneux holds a reputation as a bit of a legend when it comes to devising original gaming concepts. Fable (Xbox only) is no exception and follows a suitably grandiose vision, as implied by the game's working title, Project Ego. The principle source of innovation is the way in which your individual character evolves through the game. From childhood to senility, the way in which you develop your character will subsequently have a follow through effect. Building your strength will give you character bulging biceps, whilst more cerebral achievements will directly impact your will power. Even standing out in the sunshine will lend your skin a nice ruddy complexion.

Set in a magical fantasy world, Fable consists of free-roaming landscapes and seemingly endless gameplay paths. Apparently, this will ensure that no two games of Fable will ever follow the same route. Either way, with gameplay and graphic mechanics this sophisticated, Fable looks like being the RPG to watch for when it's finally born in 2004.