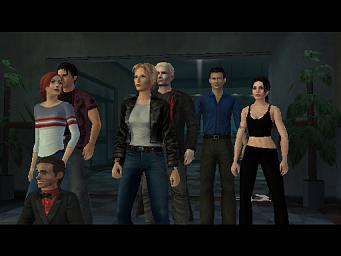 All Images (3) »
Last weekend witnessed the announcement of Buffy the Vampire Slayer: Chaos Bleeds for PS2, GameCube and Microsoft Xbox. Due for a stateside release in August, the Eurocom-developed game is touted as a "lost episode" from series five of Joss Whedon's TV creation. Based in and around the town of Sunnydale, Chaos Bleeds tells the tale of a dimensional bleed brought on by Pure Evil. The very core of humanity is, of course, at stake (oof! Call the Pun Police) and so it falls to Buffy and her clique to save everyone.

"Over the course of seven years, the Buffy series has developed millions of ardent fans ? many of whom are console gamers," said Michael Pole, SVP and General Manager of VU Games. "Fans of the show will embrace being able to play the part of their favourite Buffy characters in a fully interactive gaming experience."

If Chaos Bleeds really does fashion itself as a lost episode from series five, then maybe we can all look forward to Buffy: Once More With Feeling, based on the fantastic musical episode from series six. We can but hope for a Karaoke 'em up!
Companies: Eurocom Vivendi
People: Michael Pole
Games: Buffy the Vampire Slayer: Chaos Bleeds