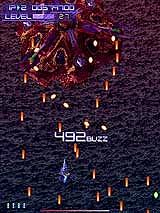 All Images (3) »
Empire Interactive has announced a deal with Japan’s Success Corp that will see the firm’s acclaimed 2D coin-op shooter Psyvariar Revision make its way to the PlayStation.

Only ever released in Japan hitherto, Psyvariar was released into the arcades in 1999, and was followed by a re-work entitled Psyvariar Revision, which expanded the gameplay and included a whole bunch of extra weapons and levels.

Psyvariar has also etched out something of a cult status for itself, with some hardcore shoot-em-up fans claiming that its puzzle-led level design and vivid, swirling visuals make it one of the best shooters of all time, better even than Treasure’s Ikaruga.

And the best news is that you’ll only have to fork out Ł14.99 for the privilege of playing it!
Companies: Empire
Games: Psyvariar: Complete Edition