Watch out for falling concrete donkeys!. 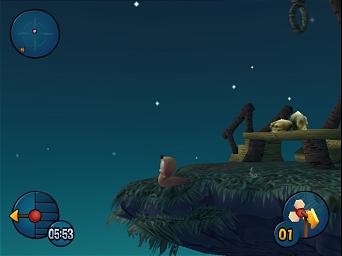 All Images (10) »
One drizzly day in Wakefield earlier this week saw us pay a visit to our chums at Team17 for an exclusive hands-on with the eagerly awaited third instalment of their massively popular Worms series. Now carrying the title Worms 3D, the game is roughly 70% complete across four platforms and is still looking on target for its scheduled release date of October this year. What we got to get our mitts on was the E3 demo - code that will no doubt prove extremely popular at the LA knees-up later this month - and we can tell you it's looking pretty darn good.

Since one of the key elements of Worms has always been its randomly generated, deformable environments, the much-desired leap to 3D was never going to be an easy task. It was even deemed unfeasible when the idea was first conceived. But now, thanks to an in-house developed voxel/polygon based game engine, the exceptionally-armed invertebrates are now battling it out - sheep and all - within high detail, cartoon-style 3D environments.

First impressions are extremely promising - it's basically pretty much what we had hoped. All the modes, features and options of previous Worms titles remain intact, but now benefit from more depth thanks to the added dimension. A versatile controllable camera keeps things simple - you can zoom in and out and rotate the view via the analogue stick (or keyboard and mouse for PC) and therefore get a good view of the battle in progress.

Control of the Worms themselves is intuitive and feels solid - each of the little guys automatically navigates the levels' undulations and is also still in possession of the classic back-flip manoeuvre for hopping up to higher levels. Once you've settled on your attack position it's simply a case of seeking out your victim and then selecting your preferred method of destruction from the massive list of weird and wonderful weapons.

The subsequent taking out of one's opponents translates well to the 3D perspective thanks largely to an eminently useful first-person view, accessed by the right shoulder button. This enables you to accurately judge trajectory before setting your power - not forgetting to take wind direction and speed into account.

With regard to the game's weapons, all the favourites are included and in a lot of cases improved upon - such as bazooka, grenade, dynamite, air strike and sheep - and we are told that a number of brand new ones are also in development. However, despite the numerous offers of booze, cash and sexual favours, Development Director Martyn Brown was unable to disclose exactly what they were. Bah!

What he could tell us though was that the final build of the game will feature a more immersive single-player campaign, featuring at least 30 missions across which you can unlock an immense amount of new landscapes, missions, challenges and sound sets. There will also be a wealth of tutorials, challenges, and a new 'Wormpot' mode that allows you to randomly configure various game options via a fruit machine-style interface.

Quizzing Brown about networking revealed that, at least at the time of writing, only the PC version is to benefit from online play. However, system requirements for the game are not too high (roughly speaking, a 1 GHz CPU and a GeForce 2 were mentioned but official specs will be out soon enough) so the game should still be able to attract a strong active online community. And we are also led to believe that a multiplayer demo has been suggested - we'll keep you posted.

So what's next for Team17? Well, development is well underway on an entirely new Worms game, but it's a secret. And we're talking a 'blinds drawn on the office windows' type of secret. Not even the immortal persuasion 'Go on, I'll be your best mate' was going to convince Brown in this instance. We will, however, be the first to bring you details as soon as we're allowed to.