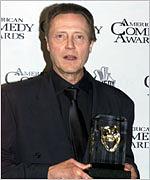 Walken - don't lend him your watch!
Grand Theft Auto. A game *so* popular, you even have Will Self
mentioning it in conversation on Vic and Bob's 'Shooting Stars'.

Finally, the very first *blatant* rip-off of GTA (The Getaway isn't
anything like GTA really, so we won't count that), is coming for all
next-gen formats and it's called True Crime - Streets of LA.

Developed by Luxoflux - the same brains who gave us Vigilante 8 - TCSOLA
blends multiple genres into a single film-like game. The action on offer
includes shoot-outs, pursuits, car chases and hand-to-hand combat,
whilst you try and take out the mob.

Funnily enough, players are also allowed to explore a living re-creation
of Los Angeles, with all tourist attractions and well-known landmarks
in-tact.

Yep. Absolutely *nothing* like Grand Theft Auto. Below is the full cast
list, which is in no-way an attempt to one-up GTA's genius hiring of Ray
Liotta's vocal talents. Enjoy until we have more...