Not a surprise, but hugely warming. Like a birthday. Or something. 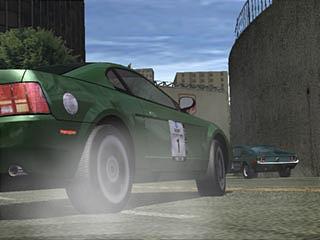 Sega?s WOW Entertainment R&D studio has shown Sega GT Online, which, surprisingly enough, is an online update to Sega GT, the series that debuted on the Dreamcast and made its way to the Xbox last year.

The game will be Microsoft?s answer to the brewing monster that is Gran Turismo 4, a fully online PlayStation 2 racer, and as such, has its work well and truly cut out.

Utilising the Xbox Live system, an impressive 162 cars will be available, from 22 manufacturers - not at all bad.

However, Sega America, famed for its miss-the-point-by-miles press releases, describes the game as ?a blend of deep simulation detail and high-octane arcade action,? which is kind of like saying a blend of black and white, which makes grey, or a blend of fire and water, which makes, erm, a wet mess.

But wait! "Sega GT Online takes racing for pink slips to a whole new level," said Mike Fischer, vice president of marketing, Sega of America, Inc. "If you think you've got what it takes to be the best, you can put your hard-earned car on the line and square off with thousands of gamers online via Xbox Live. Hey, if you lose big you can always talk trash - or grovel and beg for your car back."

We?ll keep you fully updated on Sega GT Online, which, by the way, will be exclusive to Xbox. A thorough inspection of the code at next month?s E3 is at the top of our list of things to see and do.
Companies: Microsoft SEGA
People: Mike Fischer