Right, that?s it. This is the end? 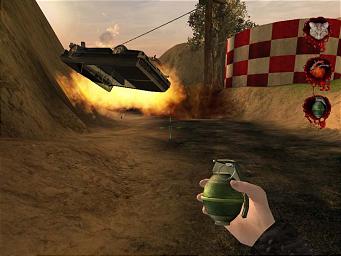 Postal 2 has gone gold in the US and is due to ship on April 14, developer Running With Scissors has announced. Whiptail Interactive, the game?s UK publisher, has told us that the game will be available to buy from April 17.

In the game, you play a former employee of Running With Scissors, recently given the boot from the development company, who?s had enough of everything and everyone. You travel around an average American neighbourhood, and decide whether or not to go on a bloodthirsty rampage ? controversial, to say the least.

Chris Warrender from Whiptail Interactive remains confident that the game will be available to buy from ?...all serious gaming outlets? as of April 17, and tells us that ??no retailers have refused to stock the game.? Postal 2 will be shown to the retail sector at the end of this week at UK PC trade event SCoRE, at the Business Design Centre in London. The game is currently awaiting a BBFC 18 rating, as suggested and submitted by Whiptail.