Simian magic to expand with spin 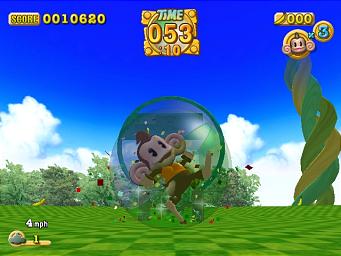 Super Monkey Ball 2
All Images (3) »
We can exclusively reveal that the preliminary work on Super Monkey Ball 3 is already underway at Sega's acclaimed R&D studio, Amusement Vision, headed up by the bourbon-powered Toshihiro Nagoshi.

As work on F-Zero, co-developed with Nintendo, winds down, focus is shifting towards other projects pencilled in for the future, which include Virtua Striker and Monkey Ball games.

One insider told us yesterday, "AV is looking at greatly expanding the mechanic behind Monkey Ball. Some of the things they are working on should explode what is possible from the game, with complete spin, controlled with the second analogue stick, already in place in early tech demos."

Woo! This is great news, and confirms gossip to the effect that has been circling for some time. "Talking to members of the team, the level of spin-friction afforded to the balls will be slight, though it will make it possible to ride walls, and have a whole new way of counter-controlling the play."

However, it's not all good news. "At this stage, it's unlikely that anything of the game will be shown at E3, it's just too early and AV has been tied up on other projects, especially Nagoshi, who's been overseeing all kinds of games from across Sega's range."