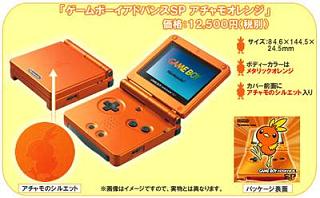 Nintendo of Japan has announced its intention to release a new version of the Game Boy Advance SP, in saucy Spice Orange no less.

Carrying the Pokemon Torchic emblazoned across its cover, the new machine goes on sale at the end of the month in Japan.

The good news is that as this is to celebrate the release of Pokemon Ruby and Sapphire, a European version is considered likely.