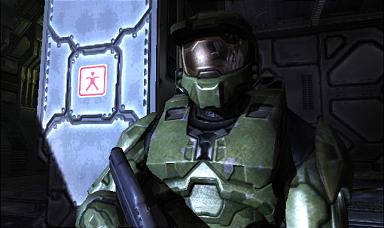 All Images (2) »
The guys over at Bungie have made a few more hints as to the goodness to be found in its upcoming FPS sequel Halo 2, without question the most anticipated title in development for the Xbox.

Talking about the main character, Master Chief, the development team confirmed that he will be more mobile than in the original game, able to lower his weapon and sprint across open surfaces and battlefields. He?ll also be able to look around corners and perform hand-to-hand combo attacks, all of which would seem to hint at a certain level of stealth gameplay - good news indeed.

What?s more, full, dedicated Xbox Live support has been confirmed, featuring all the multiplayer games from the original Halo and a whole bunch more.

As for when the game will be ready, that?s another matter. Bungie won?t be moved from their ?ready when it?s ready? stance. We predict that Microsoft will, after a certain amount of time, place certain pressures on the team that will see it released before Christmas.