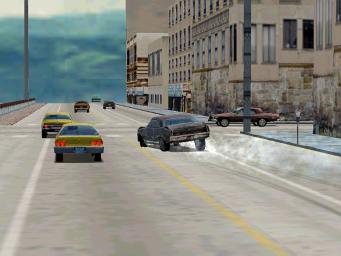 All Images (2) »
Infogrames has announced that the UK-developed Driver series is to be transformed into a movie, in the latest example of Hollywood creative types eyeing the burgeoning games industry.

The focus, at least according to the standard issue press release, will be on Steve McQueen in Bullitt-inspired car chases, all produced by Jeremy Bolt and Paul Anderson. James Demonaco will write the script, with a budget of $50 million in mind, aimed at a release in summer 2004.

?We see Driver as a natural extension of Resident Evil, which was R-rated and had a smaller audience reach," said Kulzer. "We think Driver will have a much larger appeal thanks to its action-comedy content. The script is in good shape and I think this is the movie that could put us on the map.?

Action-comedy? Bah, they had to go and ruin it, didn?t they? Stay tuned for more on all game-movies in production, like Alone in the Dark, Crazy Taxi, House of the Dead, and so on.
Companies: Infogrames Reflections
Games: Driv3r Driver Driver 2