Fox Interactive and EA to deliver Aliens Versus Predator: Extinction for next generation consoles

AVP returns, bigger and badder than before (that's badder meaning better, by the way). 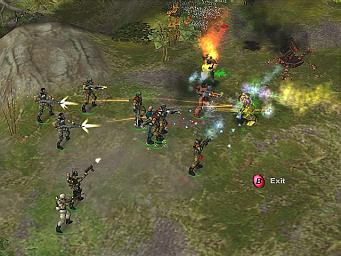 All Images (4) »
Aliens Versus Predator: Extinction is based on the blockbuster Aliens and Predator sci-fi film franchises from Twentieth Century Fox, and is the first game of its kind for next generation consoles, giving players the ability to play as one of three species: Aliens, Predators or Colonial Marines.

In this tactical strategy game, players will control the forces of one of the three species, planning their attack strategy, creating their own custom army, and choosing upgrades ranging from vision modes to weapon modifications. Each species offers a unique set of attributes forcing players to master a variety of tactics and play styles in order to be victorious. As Colonial Marines, players will rely on military training and the latest hi-tech weaponry from the Weyland-Yutani Corporation to save the human population of LV-742. The Predators must use their stealth and highly evolved hunting techniques to gain the respect of the council of Ancients. Aliens will attack in hordes to kill their enemies, impregnate them with facehuggers which evolve into the ultimate weapons. A variety of units will be accessible to the player, from basic infantry to specialised warriors like the Alien Carrier able to carry facehuggers in groups, the Predator Hydra or the Marine Sniper.