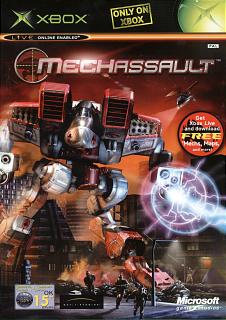 In this first update, players will find two new multiplayer maps that support all five of the current game types and two agile new 'Mechs: Raven and Corvus. The new maps include Hell's Kitchen, a fiery volcanic world; and Stone Cold, a frigid snowy environment. These new items will greatly expand multiplayer play, and this update is available for no additional charge.

Taking advantage of both Xbox Live and the Xbox hard drive, developers can now push the limits beyond traditional console game experiences: Downloadable content not only expands the game itself, but also assures that the community continues to thrive and grow.

"Xbox and Xbox Live make it possible for us to keep fresh new content and gameplay 'in the faces' of our loyal MechAssault fans," said president of Day 1 Studios, Denny Thorley. "These fans are the leaders and influencers in the industry, and we thank them for their support and patience."

Players can also look forward to the second batch of new content coming soon, which will include the highly anticipated Capture-the-Flag game type. MechAssault lets players pilot the most powerful weapons available in the 31st century, a 40-foot-tall walking tank known as a BattleMech, or 'Mech. In this third-person action/shooter game, environments are not only fully destructible, they're the weapons. Players choose from a dozen 'Mechs - ranging from quick 30-tonners to huge 100-ton beasts - which they configure and optimise to crush their opponents. Gamers can challenge themselves with 20 single-player missions as they prepare for the ultimate multiplayer online experience.