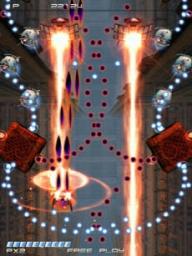 Although previously denied, the rumour mill has been grinding out versions of Ikaruga for PlayStation 2 and Xbox for over a year, despite Treasure?s protestations to the contrary.

Yesterday however, Treasure?s quirky president Masato Maegawa finally put the kibosh on any plans to release the game for the Sony machine. ?As we have stated in the past, the code from the original Naomi game does not convert well to PlayStation 2, nor does that from the GameCube. I can say that there will not be a version of Ikaruga for the PlayStation 2.?

Does this mean we have to look to the Microsoft Xbox for a mainstream future for the seminal shooter? Xbox Live support for Ikaruga, anyone?

It will be interesting to see what Treasure has in store for this year?s E3.
Companies: Treasure
People: Masato Maegawa
Games: Ikaruga