Toby Gard on the future of a legend. 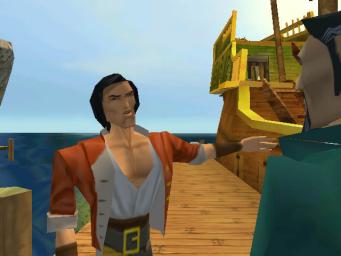 All Images (4) »
Galleon, a game that first wowed audiences five years ago, has seen the games industry, particularly in the UK, go through massive metamorphosis. Indeed, it?s somewhat ironic that Toby Gard, a man credited with springboarding the PlayStation to such dizzy heights in the west with Tomb Raider, should now be on the wrong side of the fence.

Rumour has been gathering pace that Galleon, the massive adventure/RPG title, will not be coming to market after gracing five consecutive E3 shows. This stems from internal rumblings that have seen a difference in ethos between Titus, and development studio Confounding Factor, and the fact that Interplay, the branch of Titus assigned to Galleon, has run out of cash.

The official line is that the game will be published by Interplay at some point this year, before Quarter 3 to be precise. However, the game has still to be put to bed, as Confounding Factor boss Toby Gard explained to us today.

?As far as we are concerned, the game has been finished for a while, but we are dealing with different ways of thinking about games. In Japan and the States, the focus can often be put on including a load of eye candy special effects, which can get in the way of the true game. We have concentrated solely on delivering a solid, immensely playable game. All the polishing we?ve done has kept on pushing back the game.?

And what of the future of the game? How can anyone expect it to come to market. Indeed, Virgin, the other branch of Titus and Interplay that was due to publish the game in large parts of Europe, has closed its doors, unofficially at least. ?We are still working away, continues Gard. ?It?s difficult to say what?s going on at the moment. As you may know, until late last year, all was fine, but then we were hit by financial problems as a result of financial problems at Interplay, but things are now back on track.?

Gard seems impressively and genuinely upbeat about the situation. Having proved his game design and commercial prowess with Tomb Raider in the Core days, he speaks happily, as though safe in the knowledge that Galleon delivers what it has promised for so long ? a truly inspiring, massive and wonderfully playable gaming experience. So, will the game be canned? ?Oh god! It would be crazy to can it, it?s a really great game.?
So when?s it coming out? ?Galleon should be out early this year and we are expecting Interplay to publish it.? Gard rejects the idea as misguided rumour, that Interplay has delayed Galleon again and again to simply put off bringing the game to market. Given the firm?s financial state, the cost of re-promoting such a high-profile game, and mastering enough copies to fill expected demand, it seems from the outside to be an impossible task. It is unlikely that Interplay could bankroll the disc production with anyone other than Microsoft.

Gard?s final comment on the matter is poignant. ?I don?t really care who publishes it,? he says. ? What I want is the game on the shelves and people playing and enjoying it. I just want to go on holiday!?

Whatever happens to Galleon will be noteworthy, with the game going for a world record development cycle and destined to save, or sink, a flagging publisher. Interplay is up for sale, officially, and now that The Matrix has gone to Infogrames, Galleon is without question the final jewel in the firm?s crown. We predict that a sale of Interplay by Titus must occur before Galleon can come to market, which we sincerely hope it does.

And finally, will Confounding Factor show anything new at E3 other than holiday snaps? ?Yeah, it should be quite exciting.?