The most doomed retro remake ever?

Pitfall Harry swings on in – Warning! Larry Goldberg quote inside. 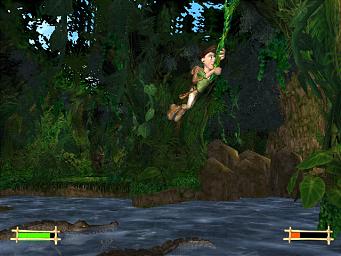 Good old Activision is keeping it real and, according to a release just issued, is still intent on releasing Pitfall Harry across all formats, despite the game’s advocates growing up and buying Mondeos.

The 2D gameplay mechanic of the original will be left intact, albeit presented in big posh next-gen 3D, featuring more than eight colours and everything! Now let’s hear what gaming guru and Activision executive vice president Larry Goldberg thinks!

"Pitfall Harry will let players take on the role of the daring explorer who laughs in the face of danger as he rescues those in distress from deadly foes and searches for lost treasures," said Larry. "This all new adventure delivers highly detailed graphics, fast paced action pathways and a host of interactive goals. Classic vine swinging and pit hopping action combined with Harry's quirky sense of humour will make Pitfall Harry one of the most sought after titles of the year."

Let’s just look at that for a moment. “One of the most sought after games of the year.” Curse that “most” and “least” confusion disease!