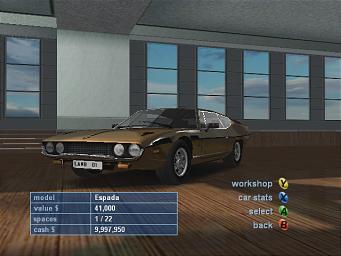 All Images (3) »
It is looking likely that Microsoft will buy outright the rights to Rage's Lamborghini game, for exclusive use on Xbox Live, meaning that the other versions, save a possible PC port, are doomed.

Talking to us today, receivers Ernst and Young said, "We can confirm that several parties are in discussions about buying various Rage games. It's a shame that an outright sale of the lot, couldn't be reached in time."

Furthermore, insiders are widely talking about the Xbox Liver version, which looks almost certain to join Microsoft's swelling ranks of online real-time games. Speaking today Microsoft said, "We are not aware of any of this. But it might happen..."

As ever, we'll let you know when full confirmation is made.
Companies: Microsoft Rage
Games: Lamborghini