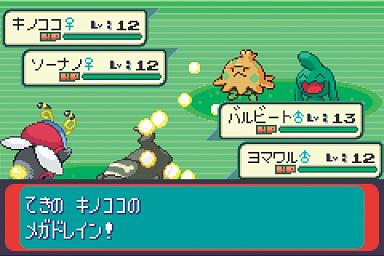 All Images (2) »
Nintendo of Japan has seen its shares leap by 8 percent in overnight trading following the release of the first official sales data from its latest Pokemon offerings, Ruby and Sapphire.

Already pushing 2.4 million individual sales at retail, after only three weeks on the shelves, analysts are widely predicting a renaissance of Pokemania to top that seen in the late nineties, when Pikachu, Squirtle and Jigglypuff rocketed Nintendo to the top of the games industry earners, more than doubling any success enjoyed by Sony Computer Entertainment.

However, in a report released by Reuters, it has emerged that sales of the latest GameCube offering to hit Japan, Legend of Zelda: The Wind Waker, have fallen off slightly since its launch on December 13th. Nintendo HQ is attributing this to the massive demand for new Pokemon games and Game Boy Advance units.

Financial analysts are now widely predicting a huge, merchandising-led profit spike for the Kyoto based firm, at least in its home country of Japan. It is expected that if sales of Ruby and Sapphire in the US mirror those in Japan, Nintendo will again be able to pretty much put its feet up for another few years.

It?s worth remembering that, if it weren?t for Pokemon, Nintendo could well have gone the same way as Sega in recent times.

At this moment, we are unable to bring you a definitive release date for Ruby and Sapphire, though the duo are expected to hit retail next summer. There has also been no word on the GameCube Pokemon RPG, which was strongly hinted at by Nintendo representatives at this year?s E3 Expo.

We?ll keep you updated on all things ?I choose you,? as they break.