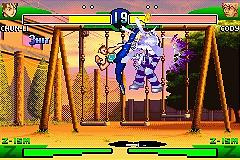 All Images (3) »
It has been revealed that Crawfish, arguably the best handheld developer in recent times, is about to be fully acquired by UK-based Climax Studios.

Crawfish, defunct now for a few weeks, allegedly suffered terribly at publisher level with its brilliant portable fighter, Street Fighter Alpha 3, with lengthy localisation and licensing issues bouncing about between Capcom and other involved parties. Reports also suggest that this was compounded by other projects at Crawfish not receiving publisher support due to the poor royalties offered by Nintendo.

According to reports, Climax will acquire all of Crawfish?s assets, to coincide with maximum staff retention.

Crawfish is widely considered to be amongst the best development studios in the world, and its demise was mourned throughout the Game Boy Advance gaming community. This news will at least mean that GBA players will have something to look forward to, now that Ninty has hawked its portable family silver.

We?ll bring you more, as we get it.
Companies: Climax Crawfish
Games: Street Fighter Alpha 3