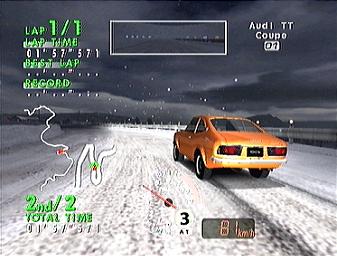 Sega GT 2002
All Images (6) »
Both Sega and Microsoft’s Japanese offices have moved to dispel spiralling rumour that the companies were in talks over a possible buy-out, it has emerged this morning.

Rumour in Japan reached hysterical proportions over the weekend, following Sega’s parent company, CSK announcing that it would be “distancing” itself from the Sonic creator. This announcement was made after Sega stunned the games industry by revealing that it had massively underestimated the dominance of the EA Sports brand in the American market.

As rumour spread, Sega’s shares rose by over 11%, causing a vicious circle of claim and counterclaim in the financial markets.

Sega spokesman Hiroyuki Soga said that there were no talks with any company with regards to a possible buy-out of Sega or any of its components. This denial was echoed by Microsoft’s Japanese Xbox division.

Furthermore, CSK announced that it would be handing over certain parts of Sega’s business that it had been keeping on its own books back over to Sega. Specifically, a key research area, known as CSK Research Institute Corp, will be amalgamated into Sega’s AM2 division. “By taking this occasion (sic) we decided to change our company name by adapting these honourable Sega and AM2 brands and restart for goal with refreshed spirit and exciting enthusiasm for success,” CSK said in a statement.