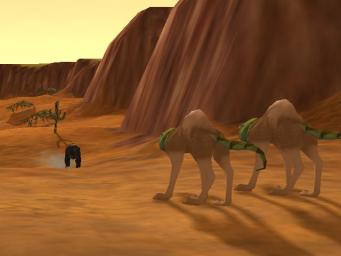 The game is a strange mixture of Command and Conquer and Pokemon and is very pleasing indeed. The player wages war with a series of hybrid angry animals in either a dedicated and involving narrative-driven main game or a series of mini-campaigns, played against either the computer or humans.

The creatures are created by juggling around the various animals and choosing the preferred attributes from each. For example, a scorpion can be mixed with a baboon. You then decide which part from each animal you want where, producing, for example, a tiger with scorpion pincers and a stinging tail that is immune to poison and hugely strong. More bizarre mixtures, involving sperm whales and spitting cobras are also possible.

Furthermore, the development team at Relic has upped the ante with the mod-community, inviting the league of supergeeks to do what they will with the engine. According to reports, it is hugely flexible to an almost overwhelming degree. Modifiers will receive full support from Relic developers, who have already released a massive batch of modification tools. Source code will be delivered to modders deemed capable enough to make any real improvements.

Expect to see this cracking little game in stores by January.

From the reaction of Microsoft staff to questioning, an Xbox version is almost certainly in the works, despite denials. We?ll keep you updated on that as soon as we hear anything.