The next wave of gloom rock? No, it?s a JoWood thing. 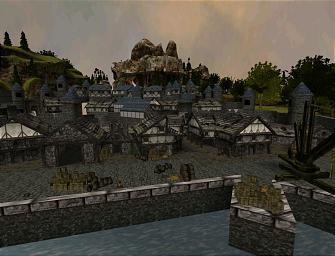 All Images (5) »
Publisher JoWood has released some details of the heavy-duty weaponry due to feature in their epic role-player Gothic 2 for PC, due in the first quarter of 2003.

Players will be able to dig out the dirt from their virtual fingernails with a simple dagger to begin with. From then on, and depending on your progress through the Gothic 2 world, the armoury gets bigger and scarier. Pokers and axes are all very well for causing small-scale damage, lightweight fencing blades feature too. But the real delights lie in the discovery of the likes of heavy spiked cudgels, bone crushers and battle hammers. Oof! And we haven?t even mentioned the Short Bow, Long Bow and the awesome armour-shattering Dragon Hunter's Crossbow. Eek!

While you?re waiting for Gothic 2 and the mayhem you can cause therein, enjoy these early, non-violent screens, and for more details about the game, point your browser at jowood.com