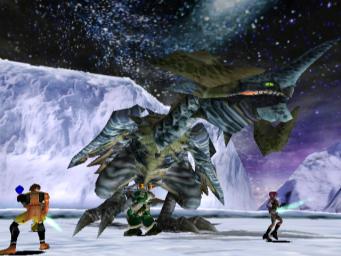 All Images (4) »
Rumour has surfaced that Sega and Nintendo have jointly decided to discontinue Phantasy Star Online Version 1 and 2 for GameCube.

This, as far as we can gather, stems from the overwhelming popularity of the game and Sega and Nintendo’s inability to cope with demand. According to American retailers, stock of both the game and Nintendo’s online adapters sold out quickly, with punters eager to get their GameCubes into the big wide virtual world.

This led to order levels of such intensity, both Sega and Nintendo were unable to provide stock, leading to rumour, albeit stemming from retail, that the games and peripheral were discontinued.

But don’t worry, it’s all rubbish.