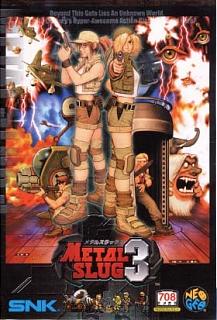 Holder of SNK brands Playmore has finally announced its intention to bring Metal Slug 3 to a next-generation console, naming the PlayStation 2 as its platform of choice.

First featuring on the Neo Geo MVS arcade platform, the only other release the seminal shooter series update has seen was on the Neo Geo home console, retailing at the staggering price of Ł300

As we reported some months ago, several European publishers have been looking at the possibility of signing several SNK re-releases, with Virgin leading the pack to bring several Metal Slug and King of Fighters titles to our shelves. However, financial difficulties at the UK outfit have meant this now looks unlikely.

We?ll let you know as soon as we hear anything.