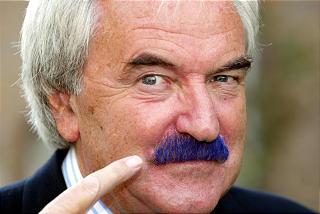 All Images (4) »
Nintendo Europe has announced that it has signed Des Lynam?s moustache as part of the ongoing marketing push promoting the acclaimed GameCube platformer, Super Mario Sunshine.

In what has to be declared as one of the more off-the-wall stunts seen in the games industry, Des Lynam will endorse Mario, due the similarities between their respective facial hair, a big bushy moustache.

?We're over the moon to have Des on board,? said Nintendo UK?s Andy Williams. ?It's a meeting of two true moustachioed icons of their age, and sees Nintendo enter the premier league of sports sponsorship. I can only hope the purple comes out of Des' moustache, and that he doesn't become addicted to playing Super Mario Sunshine at the expense of the sporting world as a result of this.?

They even got Des to comment. Speaking from behind a large pile of cash, the TV football presenter and ladies? favourite said, ?I'm pleased that the true worth of my moustache has finally been realised. It's something I've worn proudly for years, despite what fashions have come and gone. I consider Mario a long-serving brother in arms, and long may we both wear our fine facial hair with pride.?