Yoshi leads Clash of the Tongues

Well, you have to do something to market a game, we guess! 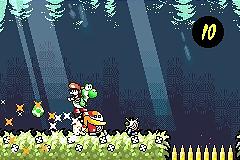 All Images (6) »
Nintendo recently held a Clash of the Tongues contest, in which contestants had to take part in several key tongue-talent events.

?I've never been so proud to see so many tired but such exceptionally gifted tongues," stated Yoshi, "From long tongues to eating jalapeno peppers straight out of the jar to licking live lizards, I think I've seen it all!?

Of course, all this silliness was to celebrate the upcoming launch of Super Mario Advance 3: Yoshi?s Island, the hotly-anticipated Super Nintendo platformer in which Yoshi guides a baby Mario through some of the best looking and imaginatively designed levels ever seen in a videogame.