Doctor Muto due to make house calls next year. Also from the Midway laboratory, Freaky Flyers. 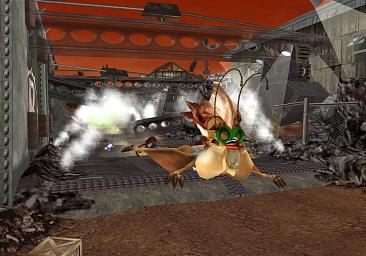 Doctor Muto
All Images (18) »
Midway, a publisher and developer with a penchant for the over-the-top title (cf Red Card, NHL Hitz and the like) is set to carry on the grand tradition with a couple of titles due next year, Doctor Muto and Freaky Flyers.

Doctor Muto redefines the image of the mad scientist, as players take on the role of the genius/nutter whose latest experiment has accidentally destroyed his home planet, save for his laboratory. With his ingenious morphing technology, Muto hopes to rebuild his destroyed world by harvesting resources from other nearby planets while dashing through a stylised universe, encountering dangerous challenges, freakish monstrosities, and battling his arch nemesis, the evil Professor Burnitall. It sounds pretty good to us. David Burton, Midway?s UK marketing director commented, "Why clone when you can morph? Dr. Muto's morphing isn't just a gameplay feature, it is a unique mechanic that allows Muto to combine with living organisms in order to accomplish tasks no human could achieve."

The enclosed screenshots are from the PS2 version. Steady on girls, the doctor is most probably already attached.

In Freaky Flyers, players take a ride on the wild side in true Midway fashion, as they embark on a twisted flight adventure. Freaky Flyers is packed with a cast of 13 amusing and outrageous characters whose stories intricately intertwine and play out against the backdrop of more than 25 interactive 3D environments. Here?s David Burton again: ?Freaky Flyers is the first and only racing-adventure game for next-generation systems to deliver aerial cart racing as well as incredibly vibrant and interactive animated worlds. Gamers will be completely immersed in the awesome world of Freaky Flyers? adventures and in each character?s story as they are dropped into the cockpit to explore, adventure and dogfight in the videogame skies.?

Aerial cart racing? Hmm, take a look at these shots from the PS2 version and try to figure that one out.
Companies: Midway
People: David Burton
Games: Doctor Muto Freaky Flyers