As reported by us first, the hotly anticipated shoot 'em up makes the leap from Dreamcast! 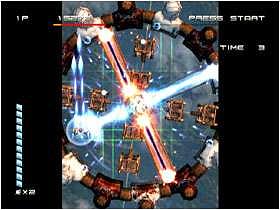 All Images (4) »
Infogrames Japan has announced that it will be publishing Treasure?s cult shooter Ikaruga for Nintendo?s GameCube, as we exclusively mentioned some weeks ago.

In joyous news, the game will be published carrying Infogrames Atari brand and will see a global release. This will come as huge relief to the hoards of fans disappointed by the game?s initial console release for Dreamcast that will be available online through Sega?s D-Direct store in Japan only.

The top-down shooter will contain the original Naomi arcade mode, a training mode and several other swanky new features including a "development mode" in which players can sample early builds of the title, and a level-edit mode.

Rumour that some or all of Radiant SiverGun will be included have not been confirmed.