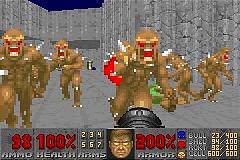 Not surprisingly, the game will be a direct port of the original version and will keep the control method as seen in Doom?s first portable outing.

However, the most interesting angle to be found in this story is the fact that id and Activision have made some interesting decisions regarding their development partner for the project.

Rather than go with David A Palmer, the developer behind the excellent Doom for Game Boy Advance, or AGB Games, the studio that has been pushing the capabilities of Nintendo?s portable using the Quake engine, it turns out that id will team up with Torus (hello to Kevin!). The Australian-based developer was responsible for Jackie Chan for GBA and Lion King for Game Boy Color, among others.

Anyway, Doom II should be released early next year, complete with 30 levels, deathmatch and co-operative play, which sounds nice.

Stay tuned for updates as they break.