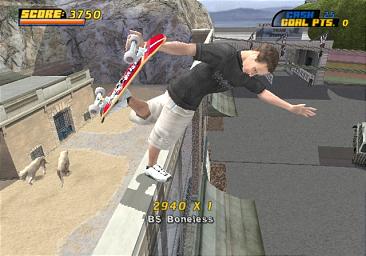 All Images (5) »
Tony Hawk, the Bird Man and granddaddy of mainstream skateboarding, has signed a 13-year deal with Activision to continue releasing games carrying his likeness and endorsement.

This impressive deal is possibly the longest running ?moving forward? endorsement deal we have seen in any industry, let alone in the world of videogames.

Now it?s well known that Activision likes to release shockingly corporate and uninteresting quotes to accompany press releases. We like Activision a lot, but this always irks us. Well, their past words are nothing compared to the following, allegedly from the mouth of Mr Hawk himself:

"I am very excited to continue my partnership with Activision O2, the definitive brand in action sports video games," said Tony. "Skateboarding is one of the fastest growing sports today and the video games allow millions of kids to perform tricks and combos that they might not be able to pull off in real life. I've been skateboarding since I was nine and playing video games for almost as long, it's been awesome watching the phenomenal rise in popularity of my two favourite activities."

Tony, what have you become?

In fact, this is the latest dishonourable corporate action to be seen from Tony in recent times, the last time being when he got his personal assistant to shout at us for asking for autographs at an inopportune moment.

The deal, agreed for an undisclosed sum, will see Tony endorse NeverSoft?s amazing series of skate titles until the year 2015.

Incidentally, Tony will be 47 by the time the deal expires.

Stay tuned for more on the excellent Tony Hawk?s Pro Skater 4 in the coming weeks.