Not a surprise, but a long time coming. 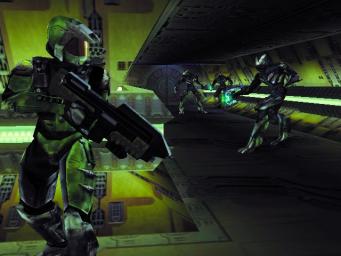 All Images (10) »
Microsoft Game Studios has finally announced its intention to bring Halo: Combat Evolved to the PC platform. A Macintosh version has also been confirmed.

The PC version will be developed by Texas-based Gearbox Software and will be almost identical to the Xbox release, albeit with an enhanced multiplayer aspect.

"We've been dying to play Halo online with a PC ever since its spectacular launch last year," said Gearbox Software President Randy Pitchford. "The team at Gearbox has the experience and the talent to not only bring Halo to the PC, but also to add enhancements that exploit the multiplayer capabilities that PCs are known for.?

The Macintosh version of Halo will be ported by Destineer.

Alarmingly, the announcement made to the press speaks of cross-platform multiplayer play between PC and Mac. ?Our goal,? said Destineer President Peter Tamte, ?is for Mac and Windows users to battle each other on foot, in vehicles, and in the air next summer when the best first-person shooter ever created comes to both Macintosh and Windows.? This comment neglects to mention the possibility of Xbox Halo players joining in the fun?