Flagship Sega icon regenerated in 2D. The way he should be. 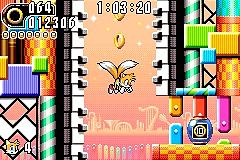 All Images (6) »
On the eve of the World Hobby Fair, Sega of Japan has released the first ever batch of (small) Sonic Advance 2 screenshots.

This will be the third contemporary handheld outing for Sonic and as you can see from the screens, it?s the best looking yet.

The GBA, essentially an uprated, shrunk-down SNES, is well known for its ability to deliver rich, colourful gaming environments and this seems to suit Sonic Team down to the ground.

Sonic Advance was not that well received by gamers as it added relatively little to previous Sonic outings. This looks like the all-singing, all-dancing superb Sonic game, complete with Tails, Knuckles and the rest.