And about time too! 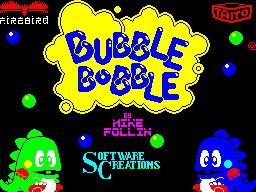 All Images (2) »
We have learnt that the classic Taito arcade smash Bubble Bobble has finally been confirmed for a Game Boy Advance release in news that must come heralded with angel song to fans of the series.

Though only confirmed for Japan at this point in time, Bubble Bobble Old & New will include a perfect conversion of the 1986 classic original, as well as graphically updated version of the same.

Although MediaKite has only confirmed a Japanese version of the game at this time, Taito, the IP owner of Bub and Bob, has said time and time again that it plans to do more with the franchise, so expect more announcements soon.

For reference, the last game to be released in the Bubble Bobble series, aside from the Bust A Move games, was Bubble Symphony (Bubble Bobble 3) for Sega?s Saturn back in 1999.
Companies: Taito Corporation
Games: Bubble Bobble